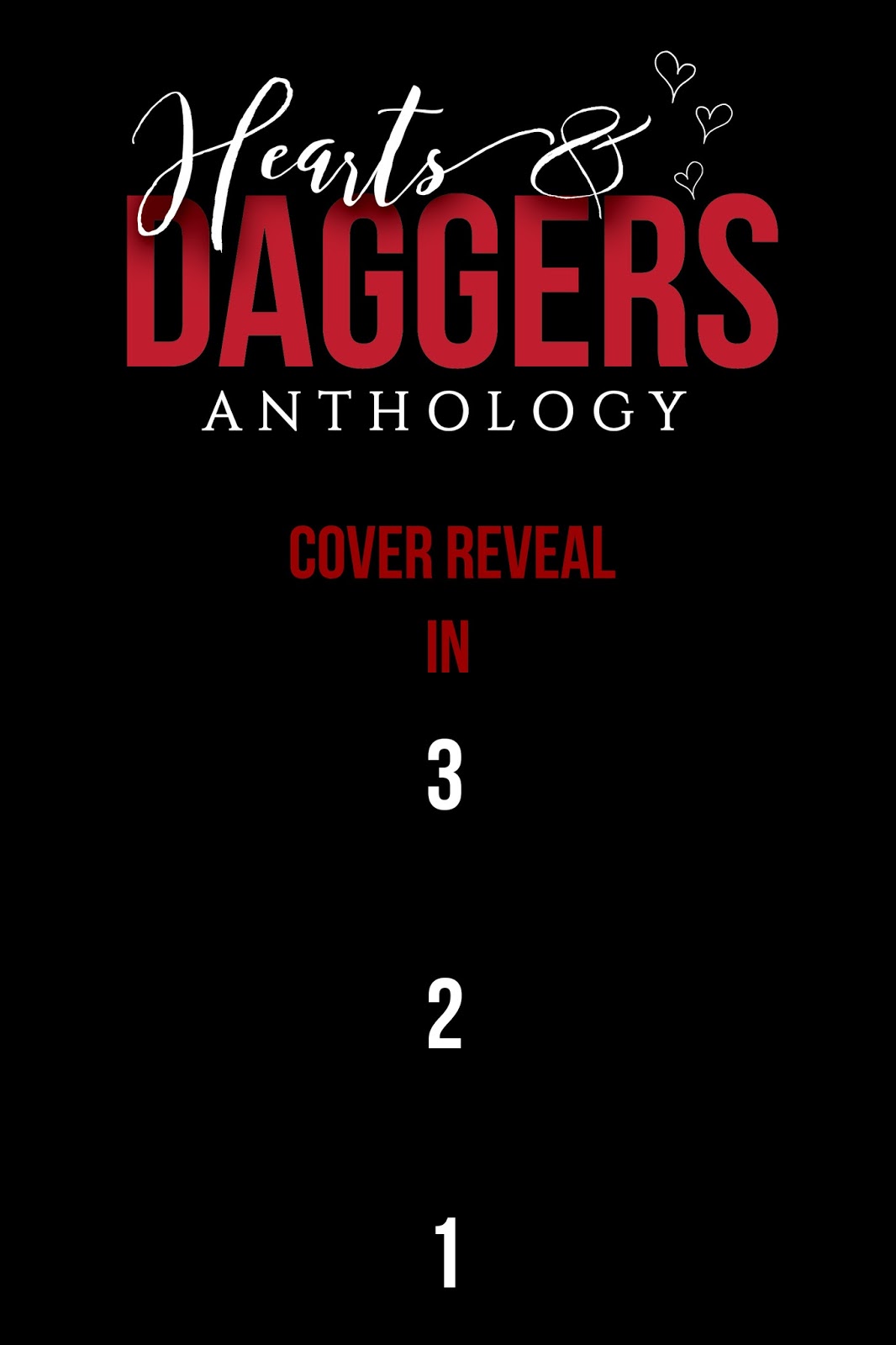 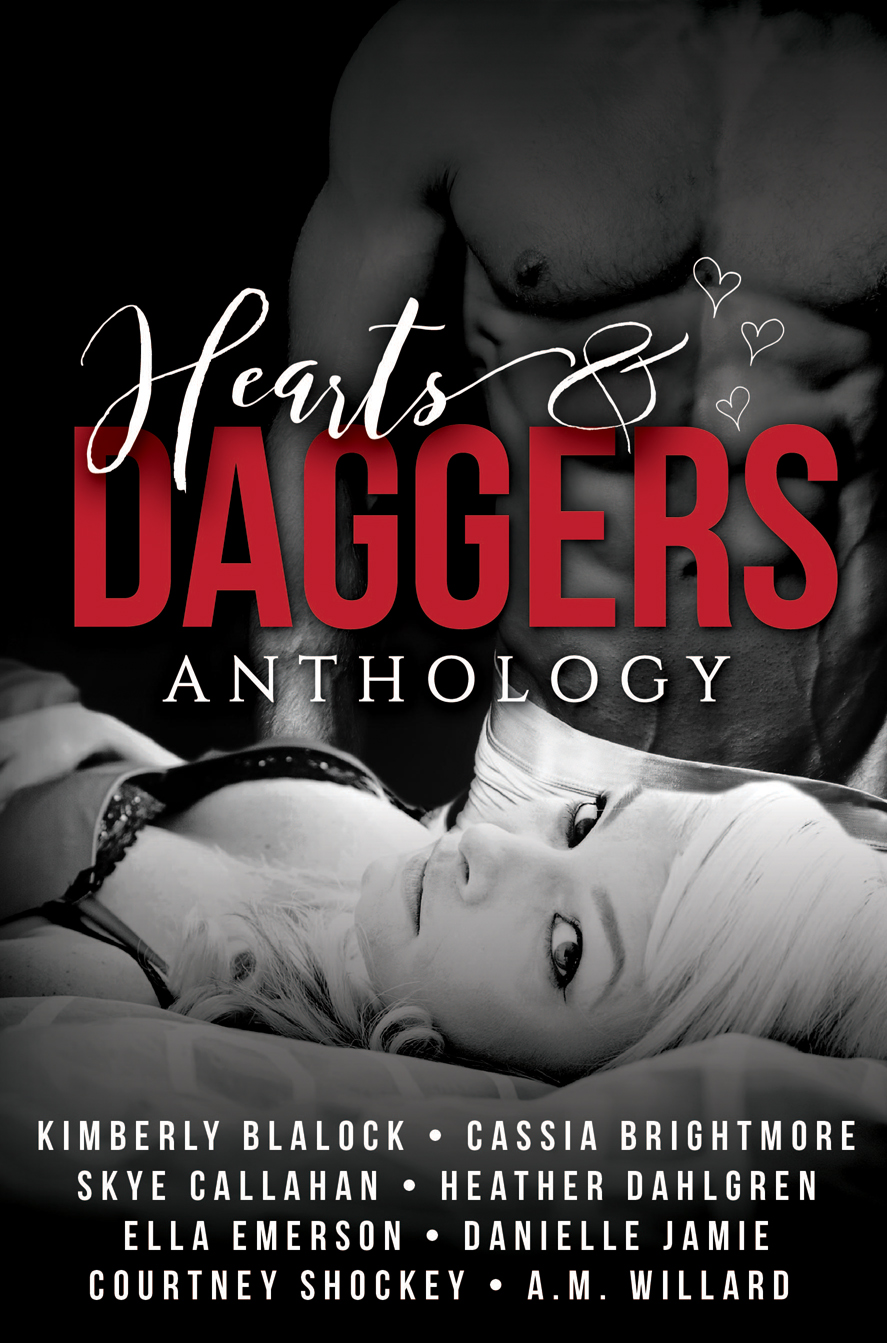 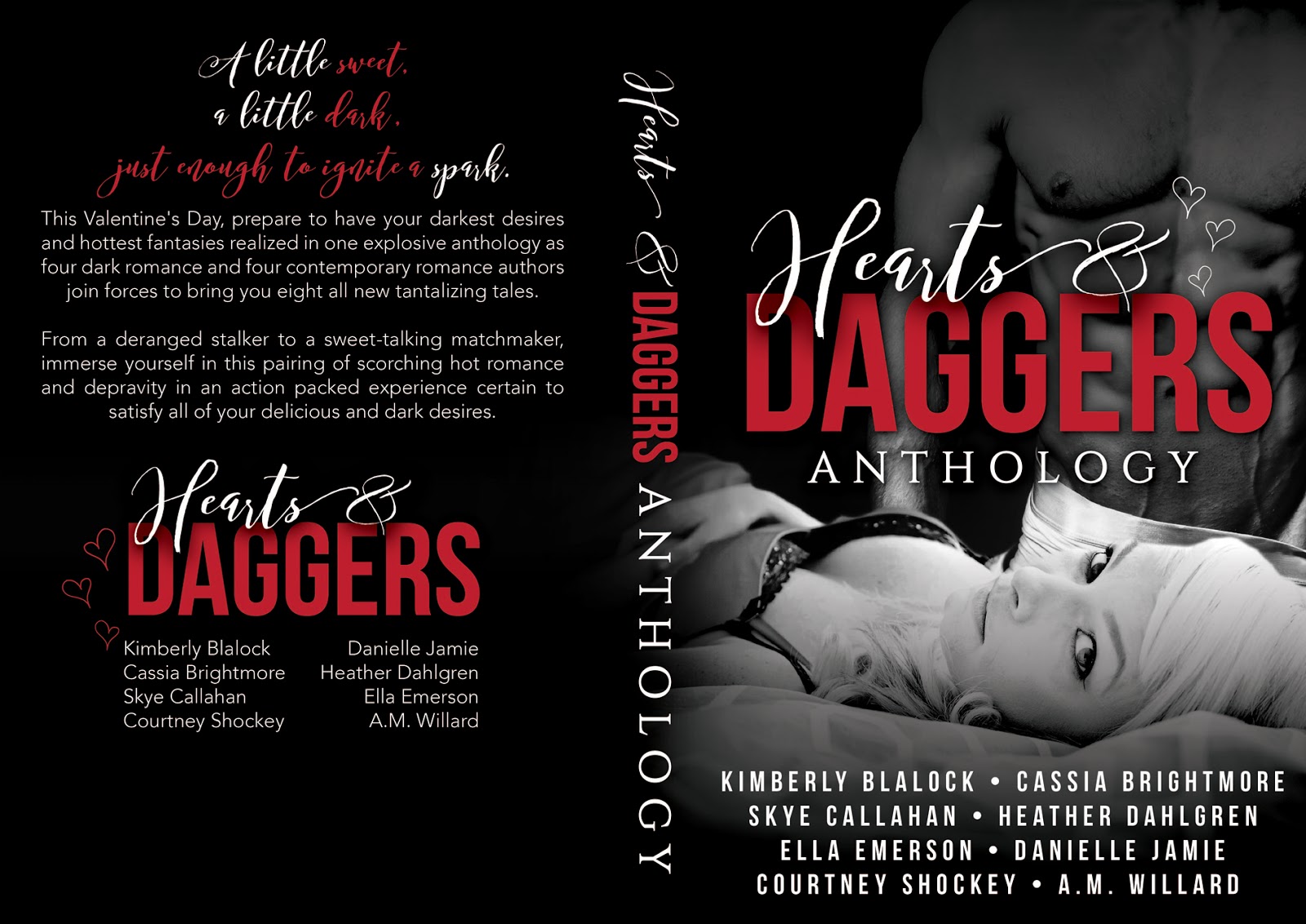 A little sweet, a little dark just enough to ignite a spark.
This Valentine’s Day, prepare to have your darkest desires and hottest fantasies realized in one explosive anthology as four dark romance and four contemporary romance authors join forces to bring you eight all new tantalizing tales.
From a deranged stalker to a sweet-talking matchmaker, immerse yourself in this pairing of scorching hot romance and depravity in an action-packed experience certain to satisfy all of your delicious and dark desires. 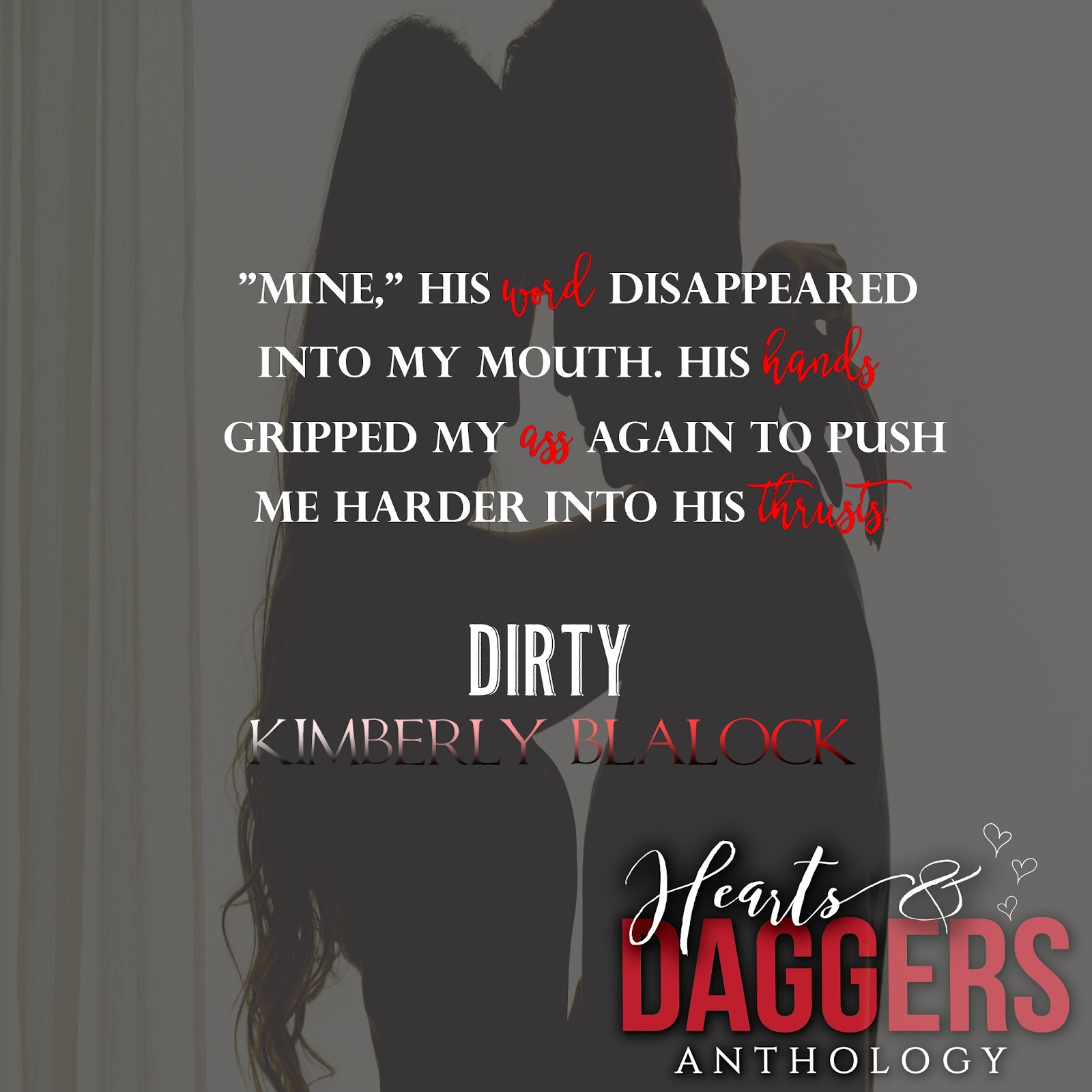 My name is Oliva Basari. I escaped one hell only to be trapped into another. Darkness and fear seething through my thoughts. I fell in love, I fell in lust… Hell, I just fell. A new city, new job, new persona… In the darkness Tess became real… MY alter ego. The jab of someone or something else building in my gut until she’s all I wanted to become. Never fearing what could happen when remorse knocked on my door. Never fearing the lustful way I stalked them… The ones that couldn’t have me, that couldn’t taste me. Until I met one very, tall, dark, and forbiddingly handsome Mr. Black. He hated me, watched me with darkness in his tormented eyes. He scared me, intimidated me, left me questioning my own sanity. He was the one thing I wouldn’t let myself submit too. The way he touched me. Slid his knuckles across my flesh. But I wasn’t a single woman, I had someone that loved me for who I was or rather had feigned to be.
In the end, we are all captured souls waiting for release or the claw scrapping escape of our own maniacal thoughts. In the end, we are all prisoners of the flesh.
Kimberlyblalock.net
Kimberlyblalock.org
Http://Facebook.com/Kimblalockangel
Http://twitter.com/Kimblalockangel
Kblalockangel@gmail.com
Mailing list- http://eepurl.com/bMFoOT 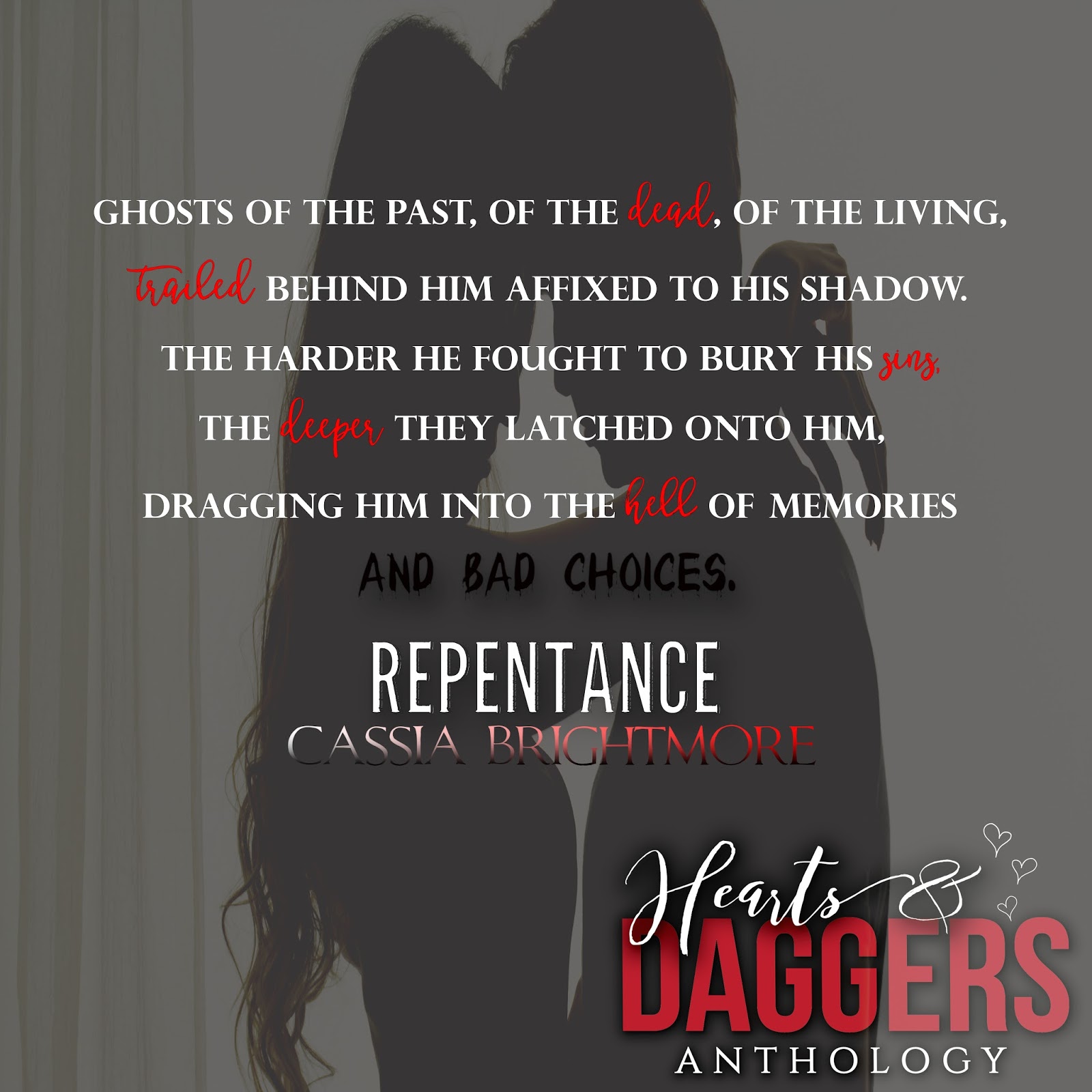 Obsession is a passionate emotion. A dark blend of desire and longing; it distorts reality into twisted fantasies. How far would you go to ensure the object of your infatuation is forever in your possession? Former Deputy Sam Ridley is a man plagued by past sins. In his eyes, being sentenced to ten years in prison isn’t punishment enough for his crimes. An unwanted early parole forces him to re-join a society that looks down on him with scorn. Exiling himself to a new town is the only hope he has to escape the ghosts haunting him. Emma Danvers is a woman looking for change. Living a life of privilege has offered her opportunities without challenges. Breaking free of the constraints of family obligation, she embarks on a journey of self-discovery. Never did she expect to be catapulted into the arms of a man searching for his own new beginning. Two people thrown together in a twist of fate. One running from his past; the other chasing a brighter future. Can they be each other’s salvation? Or will any happiness they find be ripped to shreds by the deadly obsession of another? Redemption comes at a high-staked price no one is willing to pay as the Darkness Series returns for one last mind-blowing trip into the depths of despair.
Warning: This is a dark romance novel not suited for readers under the age of eighteen due to graphic violence and situations.
To contact her you can find her here:
Email: cassiabrightmore@gmail.com
Website: www.cassiabrightmoreauthor.com
Facebook: https://www.facebook.com/CassiaBright…
IG: cassia_brightmore_author
Twitter: @cassiabr8tmore 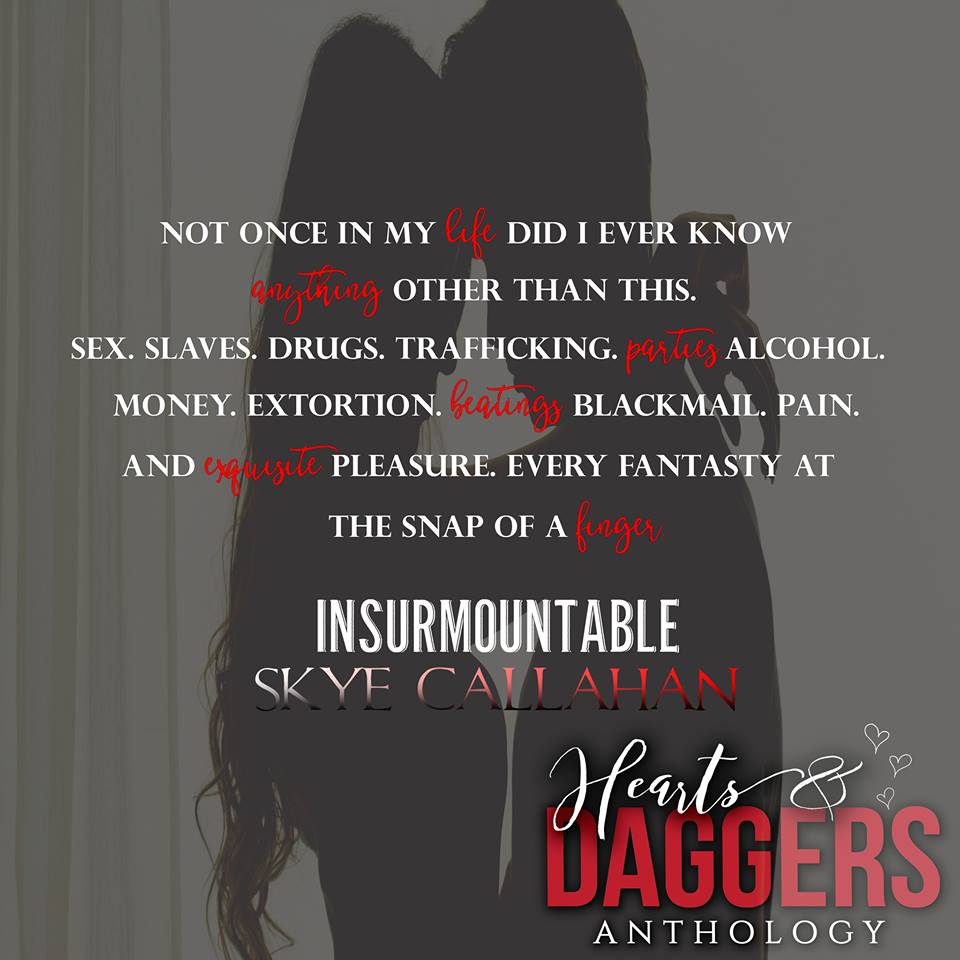 When a slave with no future meets a man with no boundaries, will their heated encounter ignite their lonely hearts or send them down in flames?

They took my life and freedom at the age of sixteen.
my prison
I live in their walks by their rules with the false and deluded hope that one day things will be different. That one day I’ll no longer be merely an object of their perverse fantasies. But deep in my heart I know there is only one end to my nightmare–death.
Until him…
my Master

Some call my home paradise, others know it as hell but it’s the only life I’ve ever known.
My legacy
At the age of ten, I saw my mother’s dead body carried out if our room. The organization became my family, molding and shaking me in their image, but I never forgot the lesson my mother taught me. I only live by their rules to get what I want in return… Her.
My Little Dove

THE MATCHMAKER by Heather Dahlgren 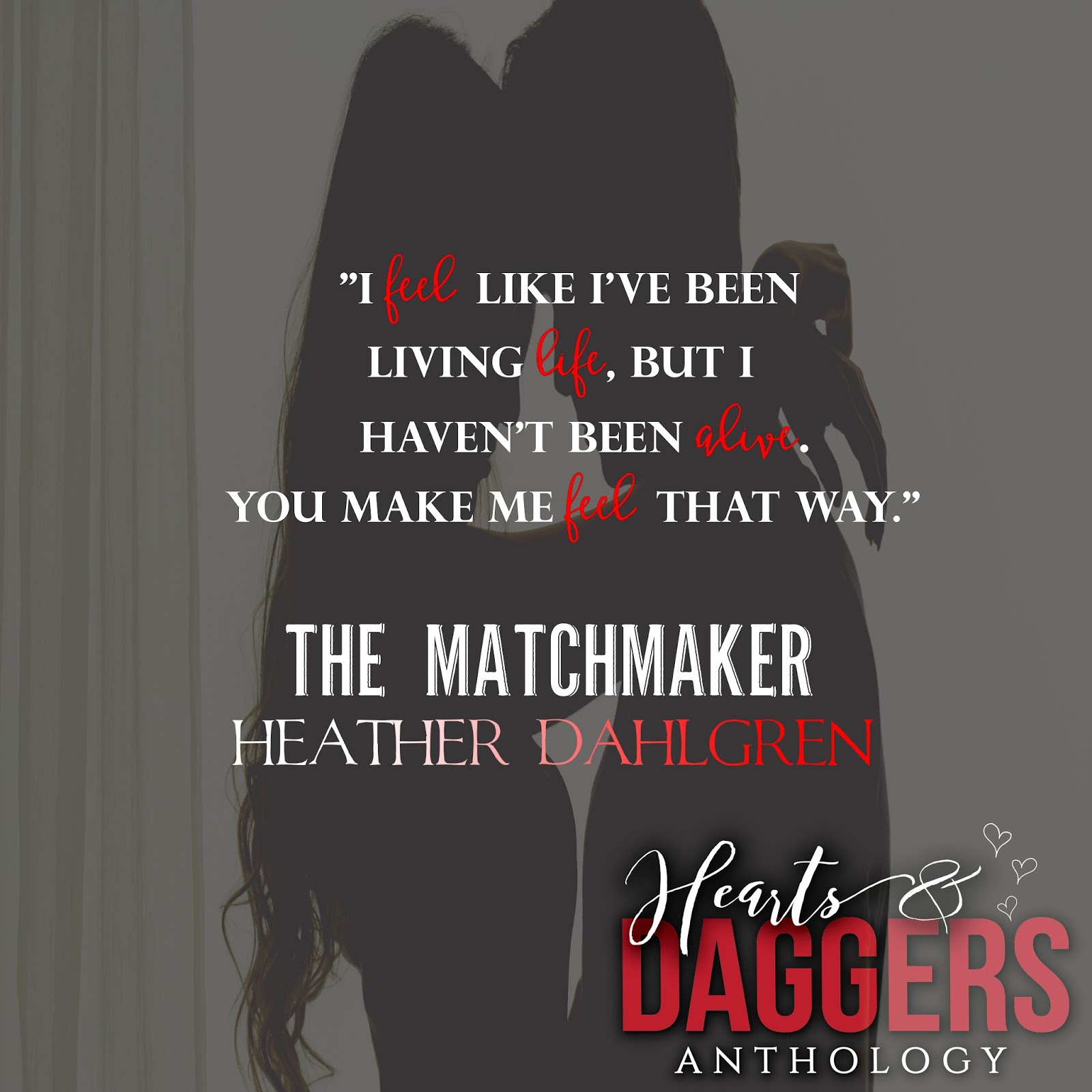 Amanda Thompson is a matchmaker and a damn good one. She’s a huge success in what she does for other people. For her own love life, not so much.
Davis Hart moves home to help his sister after her divorce. He isn’t looking for romance, but his sister believes differently.   Taking it upon herself to seek out a matchmaker to find it for him.
Finding love is exactly what Amanda and Davis need without knowing it.  Who knew a date when either were looking for more, could lead to so much?  But what if it’s built on a tiny omission of fact?
Matches can be made, but can they survive the truth?
Facebook:  http://www.facebook.com/AuthorHeatherDahlgren
Twitter:  http://twitter.com/HeatherDahlgren
Amazon:  http://www.amazon.com/-/e/B00LNTFE2G
Goodreads:  https://www.goodreads.com/author/show/8202664.Heather_Dahlgren
Newsletter:  http://eepurl.com/bdyss9

HEARTS in L.A. by Ella Emerson 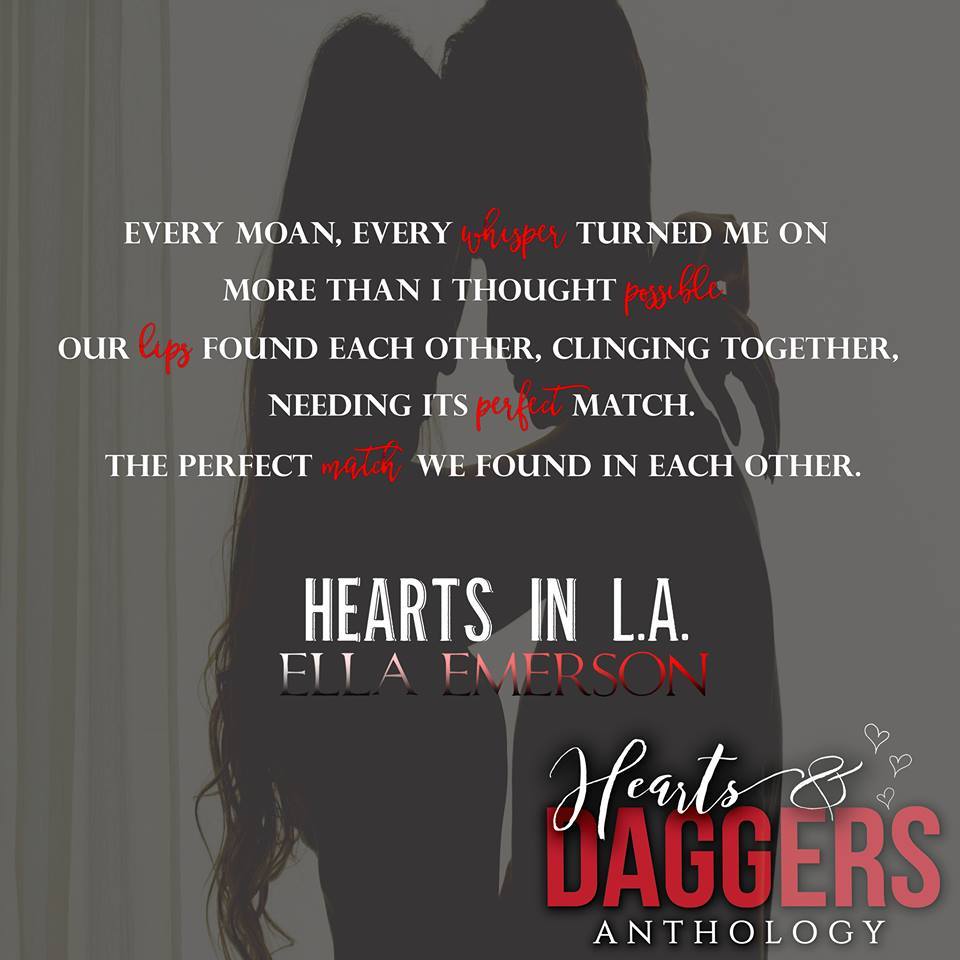 Valentina Sparks was only the biggest author at the Hearts In L.A. author convention, and Carter Jackson would do anything to meet her. As a cover model, he knew his career would be set if he could charm his way onto one of her bestselling books.
Jessica Oliver is excited to be attending the Romance Author Convention in Los Angeles. Things are going just as she planned in her life, and she has everything figured out.
But, one random meeting and Carter and Jessica find themselves exactly where neither of them thought they would be. Infatuated with each other.
With Carter’s obsession with Valentina, and Jessica trying to overcome a life she is terrified of living, will these two souls be able to connect over the Valentine’s weekend?
Sign up for Ella Emerson’s newsletter:
http://eepurl.com/1DTeXCome follow her blog Everything Ella: www.ellaemersonauthor.wordpress.com
Find her on GoodReads: https://www.goodreads.com/EllaEmerson
Follow her on twitter: @AuthorElla
Come and Follow her on Bloglovin: http://www.bloglovin.com/ellaemerson
Like her on Facebook: www.facebook.com/ellaemerson325 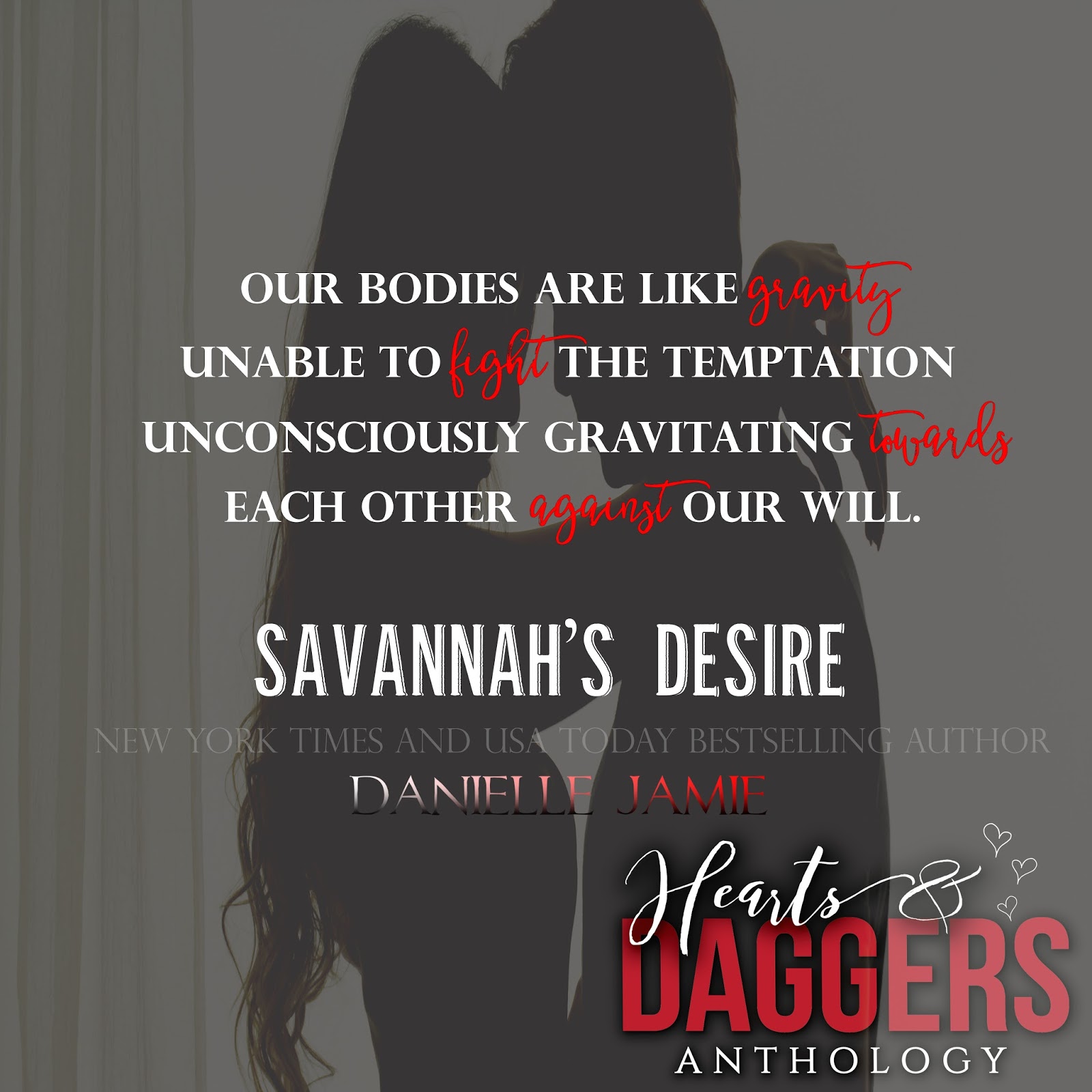 This Valentine’s Day, escape to the snowy mountains of Aspen, Colorado with your favorite book couple, KAYDEN KNOX and Savannah Livingston-KNOX. It’s been almost two years since they welcomed their twins, Brayden and Colton, into the world. Since that day Savannah and KAYDEN have yet to have a romantic getaway with just the two of them…until now!
Savannah’s birthday and Valentine’s Day will be one she’ll not soon forget. So grab your skis and fuzzy handcuffs because you’re about to board the BEAUMONT jet and set out on an erotic vacation you won’t soon forget.
www.facebook.com/authordaniellejamie
http://www.amazon.com/Danielle-Jamie/
www.twitter.com/daniellejamie85
www.instagram.com/authordaniellejamie
www.authordaniellejamie.wordpress.com

Lost in Shadows by Courtney Shockey 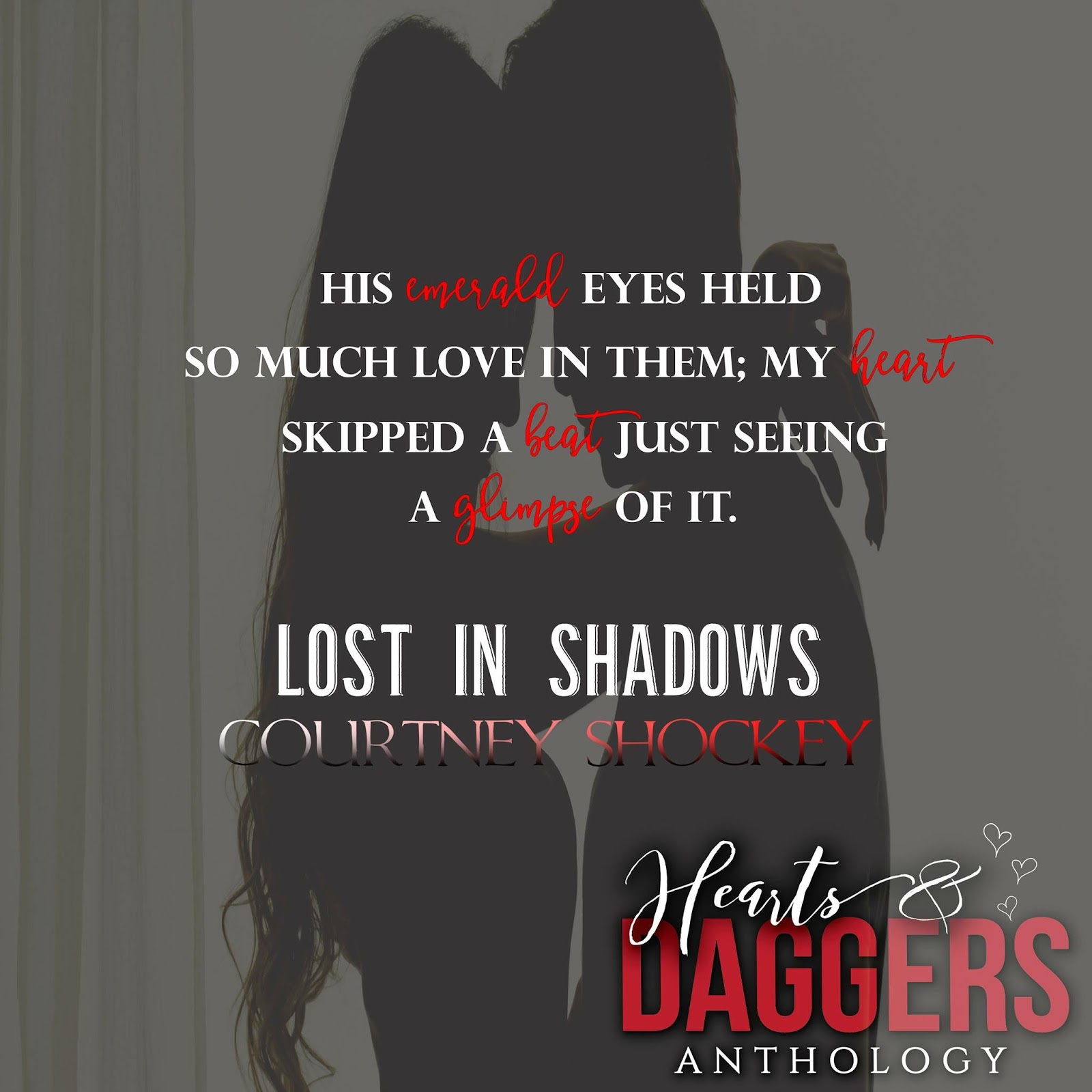 Love for Jasmine Marlo can be described in one word; Malcolm. Her wonderful fiancé holds her heart in the palm of his hand and always has, but he’s overseas using his MD to help a place in distress. The months he’s away, she fears for his life. She dreams of the perfect Valentine’s Day with him and prays it’ll come true. This story is quite steamy throughout, but also tugs on your heart strings. “Sometimes the outside can be misleading.”
Www.facebook.com/Courtneytheauthor
Twitter @ShockeyWrites
Goodreads @ShockeyWrites
Instagram @courtneytheauthor

HEARTS IN FLORENCE by A.M. Willard 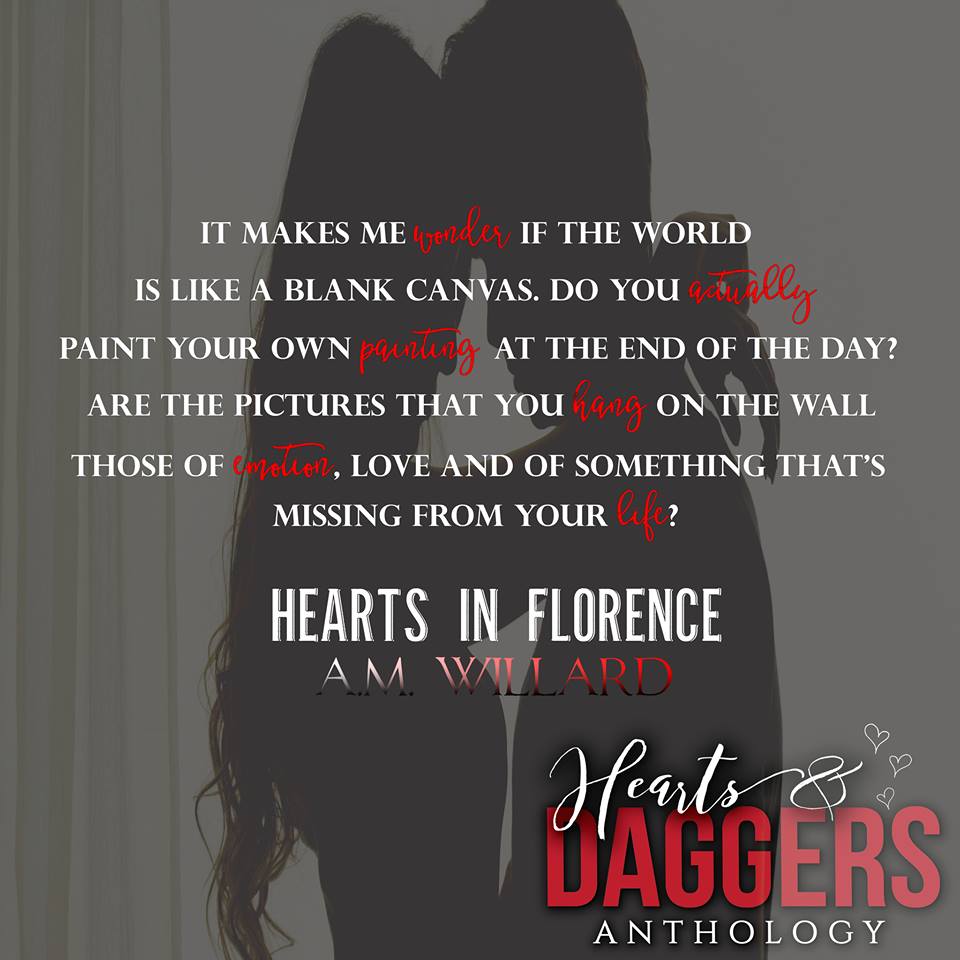 It’s not always black and white, nor is it about how much color your canvas has. It comes down to how you can connect with the ones near you, how they can cause your heart to beat faster.
Raven Bloomberg finds herself stuck in Florence, Italy over Valentine’s Day weekend. Not only has her business trip taken a turn, but she finds herself sharing a hotel room with the reason that’s caused her to be stranded. Pushed outside her comfort zone, she decides to let loose and enjoy her weekend. The only problem is; she might have enjoyed it a little too much.Pierce Ashton has a secret that he’s not ready to share. His love for art and travel has him bouncing from country to country. But, a particular art gallery assistant has him wanting more.Hearts in Florence is about opening your eyes to see the colors of the world, you never know what else might open up on a weekend of firsts.
A.M. Willard Social Links:
Facebook Author Page http://tinyurl.com/nnx2s8m
Twitter @AMWillard1 or  https://twitter.com/AMWillard1
Amazon Author Page http://tinyurl.com/lbpdpgr
Blog – Website http://amwillard.com/
Goodreads http://tinyurl.com/na2tw82
Google + Author Page: http://tinyurl.com/ncmxhad
Pinterest: http://tinyurl.com/nthwdyj
LinkedIn http://tinyurl.com/q33k33c
Newsletter: http://eepurl.com/bb-Cd1
Youtube: https://www.youtube.com/channel/UCG6IXtgQcPp8zr9zOxbP4mw
Readers group https://www.facebook.com/groups/1429330254039105/