Book Review: Something Witchy This Way Comes by H.P. Mallory

Something Witchy This Way Comes by H.P. Mallory
My rating: 4 of 5 stars 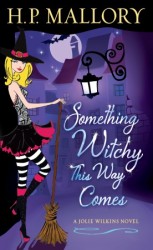 From the Publisher:
A witch’s work is never done, and in bestselling author H. P. Mallory’s mesmerizing new novel, Jolie Wilkins finds that the real magic is only just beginning.

For smart and sexy witch Jolie Wilkins, being Queen of the Underworld is a royal pain. Back from a round of time travel, Jolie must now protect her realm from the sinister Lurkers—a powerful breed of half-humans bent on conquering the undead. And if there’s one thing she knows, it’s that the supernatural never go down without a fight.

At least Jolie has her soul mate (and finally official boyfriend), warlock Rand Balfour, by her side. Honorable, brave, and unbelievably handsome, Rand is everything Jolie wants in a man. So why can’t she forget the dangerously alluring vampire, Sinjin Sinclair? With her private life heating up and a battle boiling over, Jolie sets out to prove that in matters of love and war, the fairer hex has its own set of charm

My review:
This book is full of revelations-good and bad. We find out more about Jolie’s family and learn why her abilities surpass other witches and are introduced to the Lurkers and find out who they are.

I like the heroine, Jolie’s character who goes through a whole lot in this book and she remained strong, smart and good throughout it all.

The only thing that kept me from giving this book 5 stars is that Jolie has too many inner conversations and arguments with herself,, and despite the fact that I love Rand for Jolie and they have a healthy and believable relationship; I didn’t feel for him as I did in other books.

I did, however, finish this book in one day so that says how much I liked the story.

About the Author:
H. P. Mallory is the author of the Jolie Wilkins series as well as the Dulcie O’Neil series. She began her writing career as a self-published author and after reaching a tremendous amount of success, decided to become a traditionally published author and hasn’t looked back since.

H. P. Mallory lives in Southern California with her husband and son, where she is at work on her next book.

View all my reviews

Book Blitz & Giveaway: CURSE OF THE GARGOYLES by Rebecca Chastain